Recession calls are growing by the day, but the stock market remains wary of fully pricing in this scenario for the economy.

“Investors and business managers alike tend to play the hand they are dealt, even if markets price financial assets based on expectations of the next 3-6 draws from the deck,” Nicholas Colas, co-founder of DataTrek Research, said in a note published Tuesday. “We may not have the strongest hand just now, but it’s not bad enough to force many investors or businesspeople to fold.”

In Colas’ view, the math on 3,400 works out to assuming the average 25% drop in earnings and putting an earnings multiple of 20x on the S&P 500, which is where the index is roughly valued today. 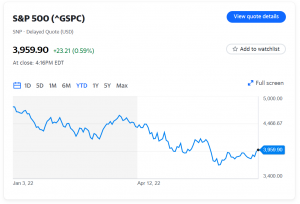 Strategists at Bank of America Global Research last week cut their year-end price target on the benchmark to 3,600 from 4,500 and called for a “mild recession” this year.

Sentiment is so poor that equity allocations are the lowest since the 2008 financial crisis and cash levels are at the highest since 9/11.

Also curbing expectations last week was Credit Suisse chief U.S. equity strategist Jonathan Golub, who cut his estimate for the S&P 500 by 600 points to 4,300 in an about face from a call by the investment bank in December 2021 that the index would finish this year at 5,200.

Even Oppenheimer Asset Management chief investment strategist John Stoltzfus — the Wall Street analyst with the highest year-end price target tracked by Yahoo Finance — recently cut his target on the S&P 500 to 4,800 from 5,330.

In a similar move, strategists at BlackRock downgraded their outlook and reduced the firm’s recommended exposure to stocks, citing increasing economic uncertainty and persistent inflation.

Despite the doom and gloom, things aren’t as bad as they look, in Colas’ view.

For example, while investors are bracing for a milder-than-usual earnings season and downwardly revising EPS predictions, the S&P 500 is still expected to log aggregate earnings per share of $56, per DataTrek. The typical recession, as noted above, sees earnings per share fall by 25 percent, a decline that would put that figure at $42 per share per quarter.

Experts have also pointed to continued consumer resilience despite inflation, as well as a job market that remains in good shape even as the Federal Reserve tightens financial conditions.

In June, the latest inflation report showed consumer prices rose at an annual pace of 9.1% in June – the highest since 1981, though retail sales rose 1% that some month, more than expected by Wall Street economists.

And though the labor market is adding jobs at a slightly slower pace from the post-pandemic average of 400,000 per month, job gains in June still totaled 372,000.

“The combination of these two factors can keep demand steady for longer than is typical at the end of an economic expansion,” Colas said, “even if the Fed is raising interest rates to slow the American economy and reduce inflation.” 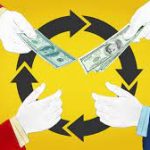 Selling to yourself: the private equity groups that buy companies they ownNEWS AND INSIGHT 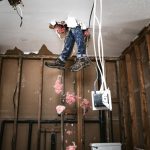 Financial Planning For The DIYer: Can You Do This Yourself?NEWS AND INSIGHT
Open chat
Contact us
Need help?