J&J Says Its Booster Shot Works, but Its Vaccine Remains Effective Without a Second Dose

Johnson & Johnson said early Tuesday that a booster dose given two months after the first shot of its one-and-done Covid-19 vaccine offered 75% protection against moderate to severe Covid-19 globally, and 94% protection in the U.S.

The company also said, however, that its vaccine remains effective without a booster. It suggested that delivering more first doses remained more important than offering boosters.

Johnson & Johnson (ticker: JNJ) presented data from a real-world evidence study run in the U.S. that found that a single dose of its vaccine was 79% effective against Covid-19, and that efficacy was stable over time, even in states where rates of the Delta variant were high. The study found that the single-dose vaccine was 81% effective at preventing Covid-19-related hospitalizations.

“It is critical to prioritize protecting as many people as possible against hospitalization and death given the continued spread of COVID-19,” said Johnson & Johnson’s chief scientific officer, Dr. Paul Stoffels, in a statement. “At the same time, we now have generated evidence that a booster shot further increases protection against COVID-19 and is expected to extend the duration of protection significantly.”

The data comes amid a debate in the U.S., and around the world, about the advisability of offering booster doses. A Food and Drug Administration advisory committee offered a mixed response on Friday to Pfizer ‘s (PFE) request for emergency-use authorization for a booster dose of its Covid-19 vaccine, signaling support for a rollout in older adults, but not in the wider population.

The World Health Organization, meanwhile, has called for a moratorium on booster doses through the end of the year, given the vast populations still unable to access initial doses.

Johnson & Johnson shares were up 0.8% in premarket trading on Tuesday. The company is selling its vaccine on a not-for-profit basis, so sales of the shot have minimal implications for its near-term earnings.

“The data is timely and comes ahead of the FDA decision on boosters in the US for PFE’s COVID-19 vaccine,” said Cantor Fitzgerald analyst Louise Chen in a note out early Tuesday. “Authorizing a booster for second shot for the JNJ vaccine would ensure that those who received the JNJ vaccine would not be left out.”

In its press release early Tuesday, Johnson & Johnson offered a truckload of data on its vaccine. That includes the real-world evidence study, which tracked 390,000 people in the U.S. who had received the vaccine, and 1.5 million who had not. The data was collected from March through July.

“These non-randomized population-based data from clinical practice in the US demonstrate the high and stable effectiveness of [the vaccine] across high-risk patient subgroups and in geographic areas of high Delta variant incidence,” says a non-peer-reviewed study funded by the company, now available on a preprint server.

Johnson & Johnson also presented data from a randomized, controlled study called ENSEMBLE 2, which tested a second dose of the vaccine two months after the first. The company hasn’t yet published full data on that study. The company said that the two-dose schedule offered 100% protection against severe or critical Covid-19 at least 14 days after the second dose. The press release didn’t not hypothesize why the protection against symptomatic disease globally, at 75%, was far short of the protection of 94% offered in the U.S.

The company also presented a full readout on its ENSEMBLE 1 study, a randomized, controlled trial that studied a single dose of the vaccine. The company had earlier presented an interim analysis of that study. The study found that a single dose was 75% effective against severe or critical Covid-19 globally, and 53% effective against moderate to severe Covid-19. In the U.S., efficacy against moderate to severe Covid-19 was 70%, and efficacy against severe or critical Covid-19 was 74%. 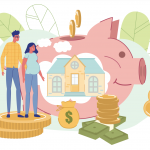 How to budget with a new baby on the wayUncategorized
Open chat
Contact us
Need help?