5 Myths We Believe About Women & Money

Women are often told that they need more help or different advice about how to manage their money—just look at the books and websites marketed specifically to women, like Citibank’s Women & Co. and Prudential’s Women & Money. But the truth is, studies show little difference between women and men’s financial knowledge and habits.

So, why does this myth persist?

“I think that myth persists because women themselves believe it. It’s the old joke: Men think they’re the expert if they just see something about something. Women have a PhD in a topic and they’re still concerned they don’t really know enough,” she explains. The financial services industry plays into this perceived lack of knowledge, and “that’s a large part of it.”

But there’s something else, too: Women still earn less money than men. “It’s not because women are asking for less: Women are offered less, and women are more likely to be turned down when they ask,” says Olen.

This—coupled with the fact that women tend to live longer than men—means that women need to save more money for retirement, and that’s another factor the financial services industry uses to convince women they need more help managing their money. But rather than treating the symptom, she explains, we need to look at the root cause. How can we close the gender pay gap in order to make real change?

Along similar lines, the financial services industry tells us that we need to be investing in higher yield, higher risk funds in order to have enough money for retirement. And when studies show that we have less money in those types of retirement accounts, women are chastised for being “risk averse.”

Olen has written extensively on this. Women don’t have less money in high-risk accounts because of an innate aversion of uncertainty: “It’s more of a symptom. People who have less money generally take less risk.”

This makes sense, given that we can’t predict the stock market to know whether those riskier investments will pay off. When we’re starting off with less, we know we can’t afford to lose what we’ve already saved.

Myth #3: We Can’t Save Because We’re Buying Too Many Lattes or Shoes

Olen comments that most of the personal finance advice given to women is, “You be a good girl and stop going to Barney’s.” But the assumption that women are spending away their savings to a greater extent than men is another myth. “Women do spend more on clothes than men,” she says, “But men spend a heck of a lot more on autos, liquor, and electronics than we do. Somehow, that doesn’t come in for criticism.”

Plus, though Americans are saving at lower rates than in the past, it’s not because we’re overspending on luxuries. “We live in a world in which our salaries are falling and our costs are rising,” Olen comments. “That is obviously going to make it much harder to save money. And it [would be] much more helpful to explain how that works to people than just give them 10 tips on how to cut their grocery bill.”

We’re often led to believe that if we set up our 401(k)s for our target retirement date, we’re saving all of what we’ll need later on. Not true. I’m embarrassed to admit that before reading Pound Foolish, I was unaware of just how recently Americans have turned to DIY retirement accounts—IRAs and 401(k)s—to meet all of their retirement finance needs.

I mentioned this to Olen, who added, “They’re completely new, and they were started as complements to the pension system. They were never intended to be the main source of retirement income. We’ve now seen them as a retirement savings vehicle for about 30 years, and we know how well they work, and the answer is, they haven’t.”

Plus, even if you’re on the right track, life is unpredictable. In her book, Olen shares stories of individuals whose retirement savings plans were completely derailed by medical emergencies, unexpected unemployment (often leading to early retirement), or the simple fact that they outlived their savings. One woman Olen spoke with had saved a seven-figure retirement plan—but had to drain it to cover a series of medical issues, including an accident that left her daughter paralyzed and treatment for her husband’s Parkinson’s diagnosis. She had followed all the rules—and was left with nearly nothing.

In response to these problems, other countries are beginning to look at alternatives, such as portable pensions that would be managed by the state, rather than the corporation; “the idea being that people can take them from job to job, and whoever their employer of the moment is would contribute to them.”

When it comes to giving specific financial advice, “I feel that the best way to give advice is by me explaining the world and how it works, and in fact, this world does not work for very, very many people,” Olen says. “We can’t afford to save for work, save for college, save for emergencies, and all the rest, in an environment in which the cost of housing, education, and healthcare is soaring.”

Rather than more education (the numerous studies Olen cites in Pound Foolish show that financial literacy just doesn’t work), Olen thinks we need stronger legislation to make a real difference in the financial challenges we face today, including the pay gap, stagnating salaries, and the complicated paperwork and convoluted disclosures involved in getting a mortgage or setting up a retirement account. If the financial services industry is so concerned about our financial well-being, she asks, “Why would they try to educate 300 million people about how to avoid a 100-page, single-spaced, gotcha mortgage? [If they really wanted to make a difference,] they just wouldn’t offer it!”

18 Truths About Women and MoneyNEWS AND INSIGHT 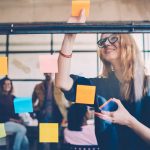 How To Be Productive At Work, According To An Email From Elon MuskEDUCATION PLANNING, NEWS AND INSIGHT
Open chat
Contact us
Need help?